During mapping and sampling of the Carissa mine in the South Pass greenstone belt of Wyoming, it was discovered that the mine sits on a major shear structure that is over 1,000 feet wide and is likely mineralized throughout this structure for a minimum of 1,000 feet and likely greater. High-grade gold was identified by sampling and drilling by various mining companies to a depth of 970 feet, and low-grade gold was identified in the large, shear envelope, during mapping of this area by Professor Hausel. At today's gold price, this mine likely contains commercial gold that could be mined by a small open pit and underground operation. Even the gold found in the wide, low-grade shear envelop is comparable to gold values mined in some of Nevada's open pit gold mines. The type of structural control on this ore deposit suggests it is likely to be mineralized to depths more than a thousand feet, to possibly several thousand feet!

Even though this is likely a multi-million ounce gold deposit, the State of Wyoming purchase the property from private claim owners and then withdrew the property including it within the South Pass City historical site without considering the significant gold potential. This, and the withdrawal of adjacent Willow Creek which cuts the Carissa shear, likely confiscated considerable gold wealth ($billions in gold) and jobs from the Wyoming public. This is sad, as the Carissa is likely the best gold deposit in Wyoming. Other potentially commercial gold deposit in the state include Rock Creek, Kurtz-Chatterton, Copper King, Bear Lodge Mountains, Penn Mines in the Seminoe Mountains, and various mineralized breccias in the Rattlesnake Hills, Wyoming.

Gold was initially reported in the Wyoming region in 1842 by a fur trapper with the American Fur Company working along the Sweetwater River... 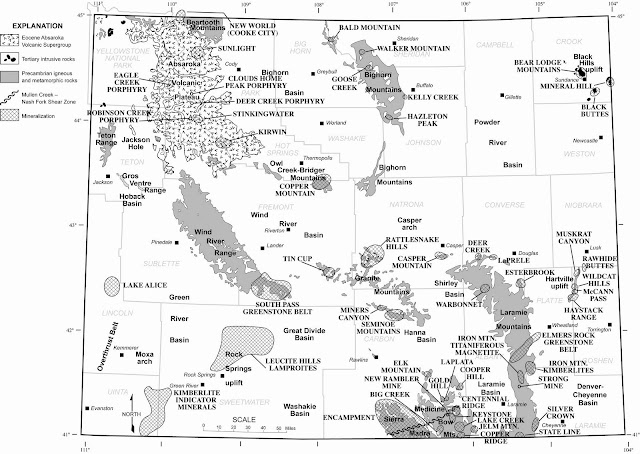